The fourth edition of this impeccable resource sees Essi Avellan MW take over the reins for the producer profiles and tasting notes whilst Tom Stevenson contributes the considerable supporting material.

A Point of Balance

Avellan and Stevenson present a unified front, completely contemporary yet unmoved by trendiness or hype. Everything is measured against consistent standards. Freshness, longevity and elegance run through every page, scrutinising wines from even illustrious producers that perhaps flatter to deceive with oxidative or developed styles whilst rewarding wines that show precision and finesse. In this regard Christie’s stays true to its origins as a buyers guide; the wines that Avellan and Stevenson recommend are the ones you would trust in your cellar.

The Grower movement is the fuel behind recent substantial publications such as Peter Liem’s Champagne and Robert Walters’ Bursting Bubbles. There is sometimes a slightly begrudging attitude amongst prominent writers towards Grande Marque houses, but Christie’s is the perfect counterbalance to the trope of the revolutionary artisan. The truth than runs against the grain of still wine culture – that large houses with slick marketing operations and multi-million bottle outputs frequently manage to out-perform many smaller, more personable producers – is allowed to emerge unqualified here, both in the ratings given to producers and in the included summaries of results from Stevenson and Avellan’s Champagne and Sparkling Wine World Championships. Piper-Heidsieck Grand Vintage given the same rating as Egly-Ouriet V.P. or Ulysse Collin’s top wines? Not something you might see on instagram, perhaps, but reflective of a reality many would recognise.

A Subtlety Not To Miss

It is worth noting with this guide that the numerical ratings given to producers are absolute, but the star ratings relate only to the wine’s peers from that region and style. There is a diplomatic sleight of hand here which allows wines from even minor regions to be recognised as ‘well above average quality’ (one star) without suffocating under Champagne comparisons.

Having said that, regions such as the Loire, Burgundy and Germany are not spared from generic criticism where the authors feel it is warranted. Readers are not left in much doubt as to the authorial view on, for instance, the suitability of Chenin Blanc and Riesling for traditional method sparkling wine, or the attitude of a region’s producers towards the category as a whole. Whether you agree or not, the clarity of the stance is useful. Consistency is the most valuable asset of a guide like this, and Christie’s is as consistent as it gets. 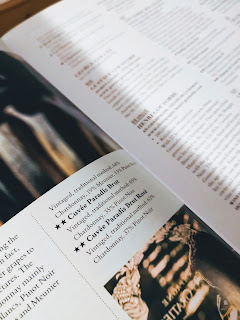 Whilst the star ratings for individual wines are not universal, each producer (with enough track record) is given an overall rating out of 100. The view on English Sparkling Wine? Extremely even-handed, diplomatic and realistic. The only producer to get a rating of 90 or above is Nyetimber, whereas most of the other top producers are in the mid 80s. In other words a fair ‘school report’ for English fizz, and surely recognisable to anyone that drinks sparkling wine broadly and without prejudice (including someone that goes to the trouble of writing a sizeable English Sparkling Wine report!).

Resources like this are never meant to be guides to recent, individual vintages (although the most prestige cuvées do helpfully receive this treatment). This does pose a problem when it comes to reporting on a category that moves as quickly as English Sparkling Wine. I feel for a couple of producers who have made giant leaps in the last couple of vintages but – unavoidably – remain rated on more modest starts. There are also a few minor (or slightly off-beat) producers from more unusual parts of the UK whose spots will probably go to higher-quality entrants in the future.

It is good to see markers for the future featured in Louis Pommery England and Domaine Evremond, even before many (or any) wines have been released. The wines from Simpsons Estate and Rathfinny have not quite made the deadline. For now, the top wines from Nyetimber, Ridgeview, Squerries, Hattingley Valley, Gusbourne and Camel Valley show a common thread; not too oaky or developed, balanced acidities and clear, fresh English fruit. Fine wines, in other words, for readers all over the world to discover the potential of the English style.

The Encyclopedia ends with a unique resource. Tom Stevenson’s ‘Micropedia’ is an Aladdin’s Cave of technical information for any sparkling wine student, taking in modern production technologies, the science of wine flavour, closures and common tasting terminology. Issues such as SO2 and post-disgorgement oxidation loom large, as you would expect from the author. It is eminently readable and relatable in style though, each entry remaining grounded in real-life tasting experience. It is also quite funny in places:

Whilst the days of annual printed wine guides are probably numbered, this sort of resource is not really replicable in any other format. With the exception of regions such as England that are populated by very young, developing businesses, the slow pace of change in established regions and the long gestation periods in sparkling wine production mean that profiles and ratings will remain relevant for many years to come. Christie’s might cost as much as a bottle of Krug, but it is both good value at that and, in all likelihood, just as long-lived.