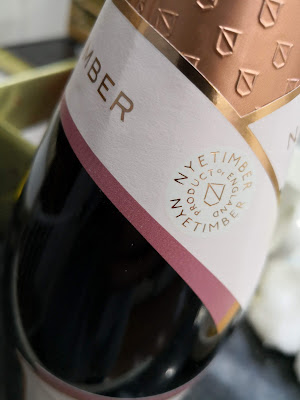 There are as many styles of Rosé as there are grapes in a bunch. If, as I’ve always felt, it should have a little fun, the tight Rosé de Blancs style (Hambledon or Pierre Gimonnet) would keep its Merino wool scarf on all night, gently tapping its foot in the corner. Those wines trading more heavily on Pinot Noir/Meunier sometimes let their hair down a little more, whether as boomingly-vinous champagnes (Piper-Heidsieck or Bollinger) or fresh-faced and summery English examples.
My favourite English Rosés have so far been those that do a good job of transmitting the wistful, fragrant character of our best Pinot. This can sometimes be captured at a surprisingly youthful stage, with some lovely wines being released with only eighteen months to two years on lees. Therein lies the balancing act for the wines that contain more Chardonnay; give it enough time for the Chardonnay to mellow out a little, but no so much that the Pinot loses its delicacy and freshness. Give it some line and structure, but probably not too much austerity. It’s not easy, and it’s not all that common; Hattingley, Gusbourne, Langham, Camel Valley, Harrow and Hope and Ridgeview all make heavily Pinot-dominant (or 100% Pinot) wines.
For Nyetimber, the Rosé MV has turned into a bit of a quiet child in the family since it arrived rather strikingly with the 2007 vintage back in 2010. It has never been one of the ‘fun’ Rosés, always featuring a clean-cut beam of Chardonnay (48% in this case) to temper the Pinot fruit. Like the Classic Cuvée it has moved to a multi-vintage model (since 2010), with this bottle being 82% 2014 and 18% 2013.
It’s an impressive wine. A little part of me wonders what it would be like if it had just a tiny touch more fun – I have a sense that some previous bottlings may have seemed a little more expressive, even if slightly less complete. The test for this wine will be what happens with a year in bottle – if it mirrors some of my other recent experiences with English Rosés, just six months could really prise it open. This was only disgorged in August 2018; if you have one of the same batch (you can check here) I’d consider tucking it away until next Christmas and finding out. It will probably last quite a bit longer than that.
Nyetimber Rosé MV (2014 base)
A restrained style at the moment, opens with sweet cherry giving way to gentle redcurrant shortbread. There’s a little white peach melba (good 2014 Chardonnay fruit in there) and red pear too, touched with macaroon and cream. Very subtle ginger and white pepper spice, with something like Thai basil too – I think some of these aromatics will come into focus soon. The Chardonnay keeps it so defined on the palate, which finds a very deft and transparent dosage balance. It’s good but it’s only just unfurling. 88-91/100

Harrow and Hope Brut Reserve No. 4

Fine Bubbles for Less Than £25?